Show/Hide
The PTRC is monitoring COVID-19 and incorporating operational modifications as needed to protect the citizens we serve, our members, our partners, and our staff.  Our office is closed and all in-person meetings are canceled through Friday, May 15th.  Where applicable, meetings will be held via teleconference. Staff will be available via phone and email. More 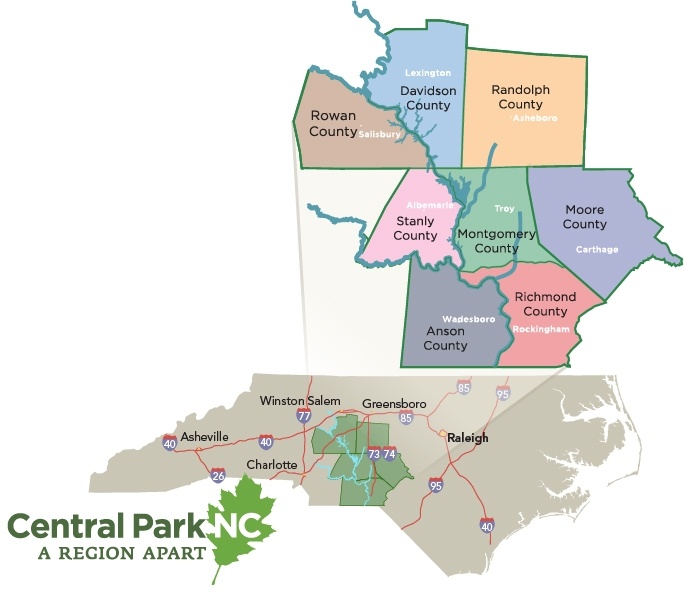 Under contract to the Bicycle and Pedestrian Division of NCDOT, the Regional Council developed a regional bicycle plan for the Central Park NC region. The Central Park region of North Carolina is comprised of eight counties in the south central Piedmont: Anson, Davidson, Montgomery, Moore, Randolph, Richmond, Rowan, and Stanly. While predominantly rural in character with small to mid-sized cities, the region is easily accessible from major metropolitan areas of the State.  Cyclists traveling in the Central Park NC region enjoy rolling hills, unspoiled scenery and lightly traveled rural roadways.  The network of routes and connectors identified in this plan provide a variety of scalable bicycle touring experiences, from day trips to multi-day tours along routes that connect to communities, historic sites, recreational areas, State parks and the North Carolina Zoo.

Four multi-county regional loop routes have been identified to serve the Central Park region. In addition, a network of connectors has been identified to provide flexibility for users to create individual riding experiences that best meet their time constraints and abilities.  Click on each heading to download the brochure/map for each loop.  If you would like to request hard copies, fill out the order form. 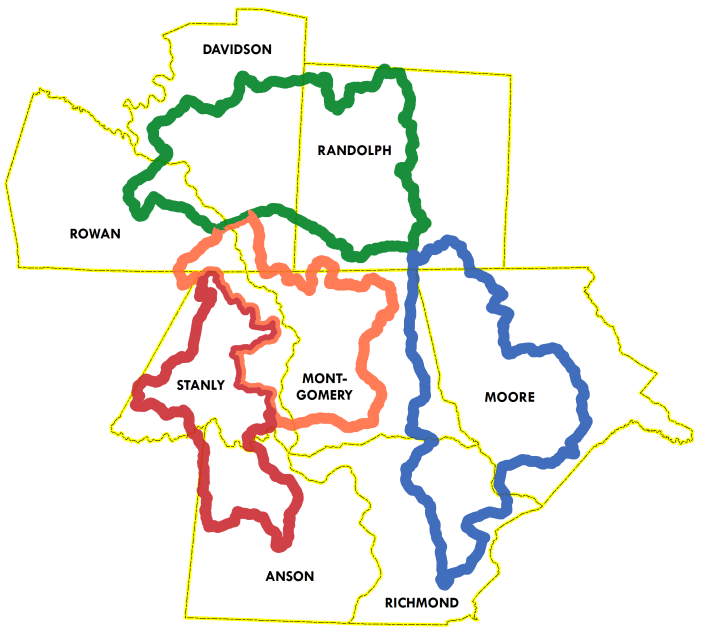 Covers 152 miles and 11 small towns and cities in Randolph, Davidson and Rowan Counties. The route highlights the heritage of manufacturing in the Piedmont, while also taking bicyclists across the Yadkin River where Daniel Boone was alleged to have lived. The cycling route is located in the northern area of Central Park passing through several small cities and towns, villages, farms and forest land.

The North Uwharrie Loop covers 132 miles and 7 small towns and cities in Montgomery, Southern Davidson, Rowan and Stanly Counties. The route highlights many of the natural heritage assets of the Uwharrie Region winding through National Forest lands, while also providing access to the Yadkin Pee Dee river and lakes and many of the small towns that grew up around gold mining and traditional manufacturing industries. The cycling route is located in the northwestern section of the Central Park region and 40 miles of the route is shared with the South Uwharrie.

The South Uwharrie Loop covers 135 miles and 8 small towns and cities in Anson and Stanly Counties. The flattest of the 4 routes, cultural and agricultural heritage is highlighted on this route, while also providing access to the Yadkin Pee Dee river, wildlife refuge and lakes. Some of the route coincides with the North Uwharrie along the eastern portion of Stanly County near the Yadkin Pee Dee river and lakes. The cycling route is located in the southwestern section of the Central Park region and 40 miles of the route is shared with the North Uwharrie.

There are two ways in which users may access the interactive web tools for these bicycle routes: