Show/Hide
The PTRC is monitoring COVID-19 and incorporating operational modifications as needed to protect the citizens we serve, our members, our partners, and our staff.  All in-person meetings are canceled through Friday, April 3rd.  Where applicable, meetings will be held via teleconference. Staff will be available via phone and email. More

The Piedmont is the area lying between the Atlantic Ocean and the Appalachian Mountains. The Triad is named for the three largest cities in the region: Greensboro, Winston-Salem, and High Point. The region boasts excellent transportation and educational facilities, making the region a hub for commerce along the mid Atlantic region. There are approximately 900,000 jobs in the Piedmont Triad. 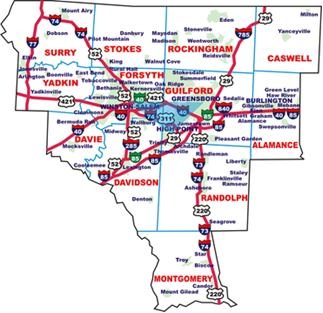 Among the 12,000 miles of roadways in the region are Interstates 40 and 85 which bisect the region east to west and Interstate 77 running north/south. Two new interstates, I-73 and I-74, are already completed in most areas and under construction in others. Piedmont Triad International Airport is located in the center of the region and 8 additional airports handle both commuter and corporate aircraft.

There are 13 colleges and universities in the region with a total enrollment exceeding 60,000. In addition, 9 technical and community colleges serve an additional 50,000 students. The region’s economy has historically been tied to textiles, furniture, and tobacco, but new growth industries are emerging rapidly, including distribution, logistics, bio-technology, and aviation & aerospace.

The Piedmont Triad Regional Council serves its 74 members and the citizens of the region by administering programs related to aging, criminal justice, housing, regional planning, water resources, transportation, information services, personnel administration, recreation and open space, weatherization, workforce development, and more. We hope you browse through our website to find out more about our region and about our program areas.